A reflection on the method and its development

For almost a year, Arcade has been developing parallel streams of alternative criticism: intimate yet open letters to artists, theater scenes with artistic roles as characters, and mind mapping. The series of maps, mostly developed as an individual endeavor, recently took the form of a dialogue. Starting with mapping as an experimental tool in art criticism addressing the exhibitions of the Pitcairn Museum of Contemporary Art, the maps and the mapping logic developed by artist and curator Elisabetta Cuccaro got discussed, commented and extended in conversations. Mire Lee & Sander Alblas’ Thou shalt spit on romance and overcome melancholy was the first exhibition whose mapping became an interacting system of thoughts, by the intertwinement of Elisabetta Cuccaro’s maps with visual thoughts of art historian and curator Celica Fitz. Weaving ideas and approaches of art, criticism, writing, thinking, and researching, an extended neural network emerges, spreading on the surface of the noted maps and diagrams. New coordinate systems of reciprocal interchange enhance the maps. They now expose multiple levels of interpretation becoming visualized thought streams, thought food, and sometimes hermetic structures. Collective mapping, as visual art criticism is created, reflected, and developed further with every new exhibition, hoping to extend and enlarge the web of reflections and interpretations.

Follow Arcade and its collaboration with the Pitcairn Museum of Contemporary Art to read more.

In the process of exchange, some notes reassembled in the form of texts were produced, and are shared with you.

From a conversation with Celica Fitz

Mire Lee’s work at Pitcairn. Something unseen we are speculating on. An exercise of imagination, desire, projection, and inference.

It is about the senses, especially seeing and touching. My eyes pierce through a screen, trying to grasp an invisible object. Actually, I am blind and my hands caress obscure forms, transforming criticism into a play of guesses and revelations.

It starts from the context, and from intentions. What is the reason behind creating a mind map, a visualization of a potential analysis (the ingredient for analysis, if it were to be a recipe)? To give food for thought, a constellation of topics and relational possibilities to articulate aspects of the work and the practice.

Mire Lee’s work navigates water fraught with unsettling disturbances. A bubbling that agitates its viscous surface, made of the forbidden pleasures disgust prompts. A realm of contaminations is found after flaying the matter of our present paradigm: that of the cyborg.

Entrails and pipes assemble and disassemble the unity of a body whose boundaries have been dissolved. The process bears other consequences, within a domino effect of dissolutions: the inside and the outside have no more a clear separation, while the organic and the synthetic intermingle slovenly. The separation between human, animal, and machine is lost in a chimera of viscerality.

Repulsion and attraction are the opposite forces pulling together the constellation of themes, concepts, and references that surround Lee’s practice. It is a constellation spotted with unease and friction, where remote and dark pulsions induce a psychoanalytical instability.

It is a work that feeds off taboos concerning bodily fluids and openings. Wounds and genitalia: epistemological thresholds where holiness and impurity, as well as incredulity and belief, meet. Pain and ecstasy overlap, while disgust and fascination triumph (while looking at the scene).

The cyborg, a metaphor for our society, is a logos incarnated whose inner working Lee exposes, traveling beyond the categories of good and evil. Its aching and mutilated body offers glimpses of a grim salvation. Or a mirror to reflect back the monster we have become.

The tension between materiality and intellect, body and clay, machine and …. is maybe related to what Mira Lee calls the ‘antagonist’ aspect of her work for the Pitcairn Museum of Contemporary Art: “Antagonism, while on the surface seeming pessimistic and hateful, is often served by imagination and desire. In the end, when it comes to art, the antagonistic subject becomes more and more in love.“

Antagonisms seem to build one of the main concepts of this exhibition, combining artists that work with or without surfaces, with burned and liquid clay. And it seems to address the horrors of the lack of antagonisms, when demarcation and categorizations fail and lead to an almost unbearable tension of decay and curiosity (‘Schaulust’).

ANTAGONISM OF INSIDE AND OUTSIDE – SURFACE AND INTESTINES

Both artists work with clay – the material connects Mire Lee’s work to those of ceramic artist Sander Alblas. In opposition to the kinetic installations, his ceramics are stable objects. They have material bodies, with a clear distinction between their hidden inner clay and their shiny surface to be looked at. Antagonistic to the work of Mira Lee those objects have surfaces, Sander Alblas is working with the exterior/coating that is desperately missing in the installations.

The Installations of Mire Lee seem to have no skin/membrane to separate the inner machinery or technique organs from the harmful/destroying outer world. The clay dries, liquids are leaking, and pieces of machinery wear off, oxidate, rust, or decay. The installation needs to be cared of, the artist says. Being forced or driven to continue working and moving, they stumble continuously in the surrounding space of the exhibition. Lacking a clear line and distinction between inside and outside they also move between categories of machine or body, process, and result.

Viewing the kinetic objects leads to questions of time and processes. What is the purpose of this low-tech machine? It is producing nothing, creating nothing but its own movement. The objects seem to be more a result of something than a productive machine. They are the results of unsuccessful processes, misguided experiments, and failed transplantations. The association of a surgical instrument is caused by liquids and pipes. The objects seem to be pulled out of their bodies and out of their skin. These dysfunctional objects lack a layer of tissue. They are intestines without a protective envelope. So they are something that is not meant to be looked at. Something that blows up the categories of what we have learned to see and separate under art or machine or body.

DISGUST AND CATEGORIZATION. Attraction and Dirt.

Disgust occurs when categorizations are not prevalent: From an object that does not correspond to the categories, one must distance. It is made disgusting and devaluated by othering. This evaluation speaks more about one’s own socialization, than about what is looked at. Proximity, Fascination, Disgust, Fear, and Curiosity are not only antagonists but are constitutive of each other.

A fascination arises for this threshold of visual disgust and voyeuristic curiosity. Here we are allowed and wanted to view, what usually has to be blanked out by the educated gaze: The inner, the open, the exposed, and the shameless. The skin, the shell, and the surface are what separates the inside from the outside – what is shown and meant to be hidden. The sculptures show dysfunctional remains. That which is left behind – in the backyard of society, in the waste can of the surgery rooms of the contemporary – continues to move, twitching and dripping, even though it already is eviscerated.

Mire Lee often uses antagonisms according to desire and sexuality, addressing the tension between excessive longing and stimulation overload. Melancholy as well as Romances are outdated terms and concepts that have become questionable. Addressing them using the tension of material and technology, curiosity and disgust is a radical de-romanticization and disclosure of the material and carnal: „Thou shalt spit on romance and overcome melancholy“. 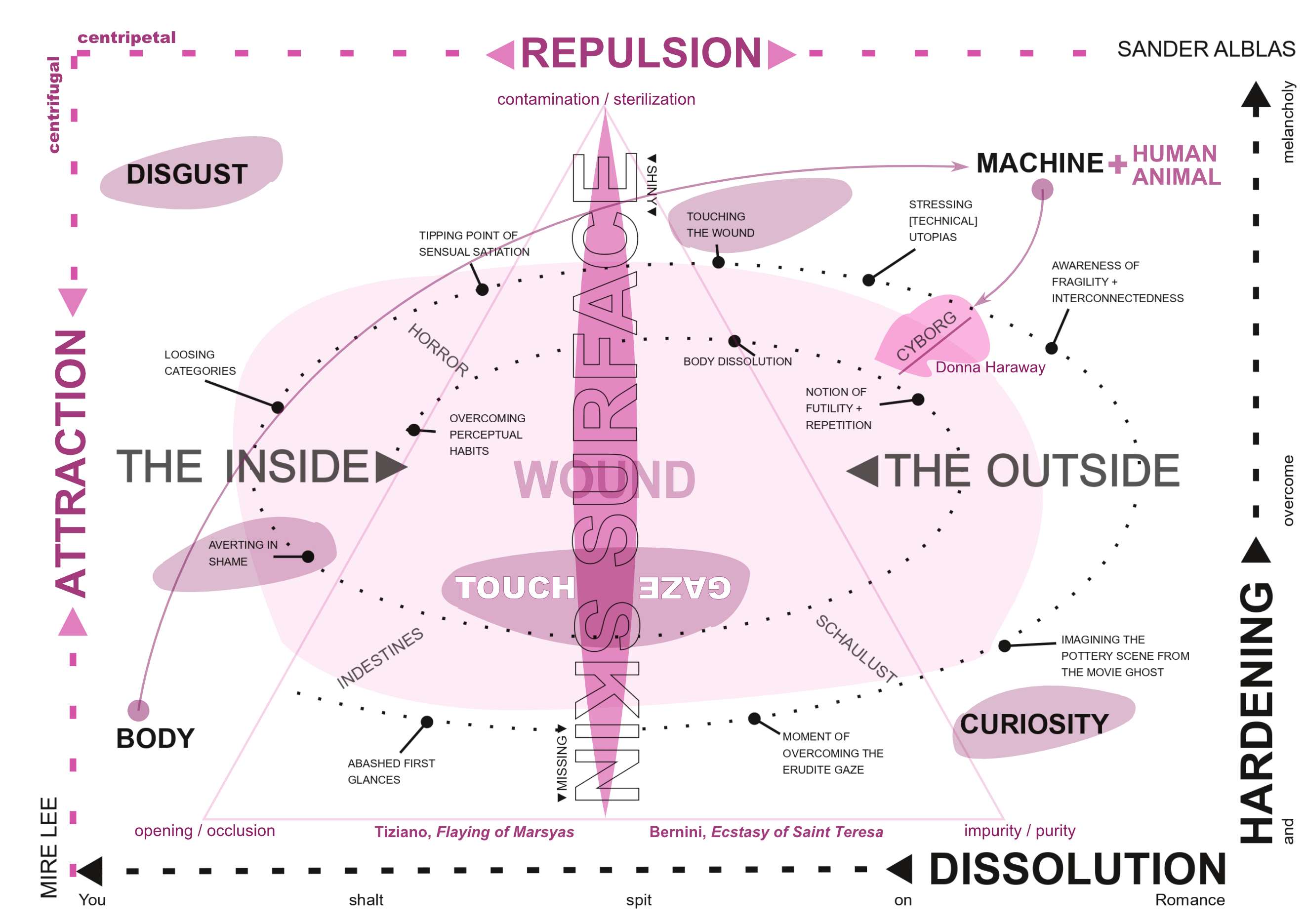 pictures: details by the artist.