THE TRAVEL OF THE LOST CHILD.
A TROPE BETWEEN DEPARTURE AND REVERIE

This text hopes to set the tone for successive writings. It is, indeed, the first of a series of reflections related to PMCA’s exhibitions program. I hope, dear reader, that you will excuse its lengthy introduction: I justify it for the importance of sharing the story that brought me to define my own method, and its peculiarity.

All started while discussing the art-critical project Arcade with my fellow friends and writers Maartje and Klaudija. In order to allow a multiplicity of perspectives on the same subject of inquiry (aka each single exhibition), we came up with the idea of pursuing a specific critical path of experimentation each. I could not but consider my own position: within the team, I am the only one who is not based in Groningen, the city where the Pitcairn museum is located. In fact, I am writing from Italy, near Milano. Instead of following my usual procedure, I decided to challenge my own rules and use the distance involved in my situation as a tool, translating geographical separation into a methodological device: I chose to limit my “working material” to remote sources: PMCA’s website and Instagram information.

I had the feeling of being a detective of a cold case, looking for traces in order to solve a mystery. But this feeling quite soon turned into something uncomfortable, and the very metaphor went bad. Sneaky assumptions carried by it had become problematic: that an artwork had to be looked at as if it were a puzzle, as if it were a problem waiting for a solution. I asked myself: Do I need to find clues to solve the artwork, or is the artwork a clue to solve a mystery? Can it be solved at all?

I still do not know the answer, but I found some benefits in changing perspective, which I share with you: I realized that I was less a detective than a cartographer. This metaphor better conveys how I feel about art criticism, and hopefully it will also stimulate your curiosity. It keeps the thrill involved in dealing with something new, but it dissipates the belief (even the need) of decisive elucidations. The similitude could spark further interpretative features, but I’ll just expand on its role in defining how images – the effective material of this text – are approached here. Images, and their playful transmissions, are the generator of these words, which do not depend on analyses of the artist’s oeuvre or person, nor from the exhibition in itself (which I did not even see). Echoes and linkages between images are at the core of the process. One picture called for another, and following my intuition, I came to connect disparate fields, starting from the thumbnail of Sara Postolle’s exhibition Soon – a lonely girl sitting straight, while waiting at a bus stop – and ending up with a cacophony of visual references.

For this text, I hijacked iconography, or better flirted with it: the methodical research of sources, the reconstruction of classifications, and the reference to art historical movements were abandoned, while the importance of the subject matter was kept dear, together with the consequent understanding of representation as continuous developments of visual repertoires, and constellations of schemes and motifs. Aby Warburg spoke of pathosformel, a term that refers to the pictorial functioning of cultural memory,  a mechanism where the conventional expression (form) of an emotional content (pathos) creates recognizable figures, which travel through time and space. Inspired by Warburg and his last unfinished project Mnemosyne, I let myself wander between a forest of pictures, following a path of resemblances, in order to find a relevant figure, a trope. I have charted this land, creating visual mind maps, so to share this journey with you. One map is general, it presents the whole of pictorial constellations developed from the starting image. The next paragraphs will attempt to reconstruct the passages and linkages that build the map’s core elements. The other map -on a black background – is a visual bibliography, which reunites at once texts dear to me for both this theoretical framework, and other books connected to my interpretation of Sara Postolle’s project [link]. These are tools which aim at offering inspiration for further explorations and reveries.

The following reflection is mostly based on a small parade of three characters/images: Sara Postolle’s previously-described thumbnail, Chihiro – the 10-years old protagonist of a phantasmagorical series of adventures – from japanese animation Spirited Away (2001) by Hayao Miyazaki, and Shinji Ikari – the traumatized teenager whose destiny is to pilot a huge humanoid robot to protect humanity – from ’90s mecha anime series Neon Genesis Evangelion (1995-96). Sara, Chihiro, and Shinji do share a visual thread. But what do they exactly have in common? And how are they connected to children’s stories such as Antoine de Saint-Exupéry’s The Little Prince and traditional tales like Hansel and Gretel (other classics belong to this train of thoughts, like The Secret Garden by Frances Hodgson Burnett, or Alice’s Adventures in Wonderland by Lewis Carroll)? If you are curious to know, please continue reading.

That sitting figure, silent in its loneliness and stillness, was not new to me. The mixture of departure and abandonment related to the picture was also conveyed by other little human beings I had already met somewhere in the past. The pose sparked the snapshot of a character from Miyazaki’s animations: after a short image search, it appeared to be Chihiro, traveling on a train, patiently waiting to reach her destination, accompanied by supernatural creatures. Sara and Chihiro both sit straight, naked legs as a repository of resting hands. It is a composed and self-controlled posture, almost wistful or pensive. Almost. Look at how they are silent and  lonely, no matter if they travel by themselves or with others. The images fluctuate, out of their narrative context. But there seems to be some narrative elements in common, or they might be sharing the very power of narrativity. Sure: it is a travel, there must be a story. But it is not just a story that they share, there is something else. A reason, maybe, surely a vibe, suffused with solitude and nostalgia.

Their differences seem to be of little significance, almost a proof that what matters is a common emotional core. Sara is waiting for the bus, Chihiro is already sitting on a train. Although different, these moments belong to the same continuum, a personal journey caught in its thoughtfulness. The instant is that suspended condition typical of passive travels where presence and absence, movement and stillness interact and intertwine. It is both a time and a space for reverie and reflection. Here Shinji appears, protagonist of agonizingly long sequences of train trips throughout many episodes. He spends a considerable amount of time sitting on express trains: sometimes alone, albeit surrounded by many passengers, sometimes in an apparent dialogue (actually a visualization of his own inner monologue). In one early episode, he just keeps staying on the train for the whole railway circuit: refraining from social interactions makes him lost in a journey with no final destination. In later episodes, his doubts take the form of conversations with a fellow pilot, the eerie girl Rei Ayanami. 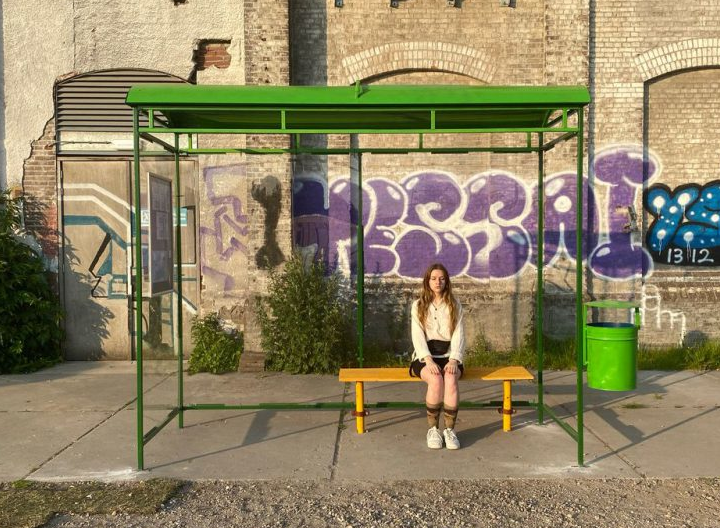 As a group of related pictures, Sara’s thumbnail, Chihiro’s travel and Neon Genesis Evangelion train sequences depict what I call the trope of the lost child’s travel: the figure of a child in the stillness of a sitting journey, and all the emotions it carries within. I cannot but emphasize how this peculiar trope thematizes the condition of traveling in relation to childhood and loss: all these figures are not adults, even if they move in an incomprehensible adult world. Its emotional scope intertwines two main dimensions – traveling as waiting, and departure as abandonment – within the domain of childhood, a land where child-like emotional stances are recollected. The powerful symbolism of a journey appears here in the passivity of a traveling child, and is perceived as a waiting moment, a condition for daydreaming or staging the hallucinatory dimension of a suffering consciousness. It strictly relates to the dimension of departure as abandonment.

Stepping back from the images, we can see that these children share similar stories too: they are all abandoned in more or less literal ways. Sometimes like Shinji, it is a crude fact  (his mother dies, and his father transfers his parental rights). Other times, they are left alone by their parents – as not being heard or cared of. Chihiro, for instance, is obliged to leave her friends behind due to her father’s relocation in a remote town. Several degrees of  grief subtly color the act of traveling, as if it were set in motion by absence and loss.

Stretching, maybe with a hazardous move, this reflection, many stories of and for children appear to match this trope’s complex emotional atmosphere: Dorothy in The Wizard of Oz, as well Alice in Lewis Carroll’s classics, but also old tales like Hansel and Gretel: their protagonists are children who happen to be traveling through wondrous and frightful adventures – perhaps reveries or hallucinations – once left alone by adults, for any kind of reason.

Sara Postolle’s exhibition project started this journey, setting the suspended time for trains of thoughts to occur. After all these words and what they managed to evoke, the time has come to say goodbye. Please, close your eyes and let childhood memories take your hand. Savor the reveries brought to mind, embrace the nostalgia: you earned the ticket for this fantasy ride. The bus is coming. Soon.