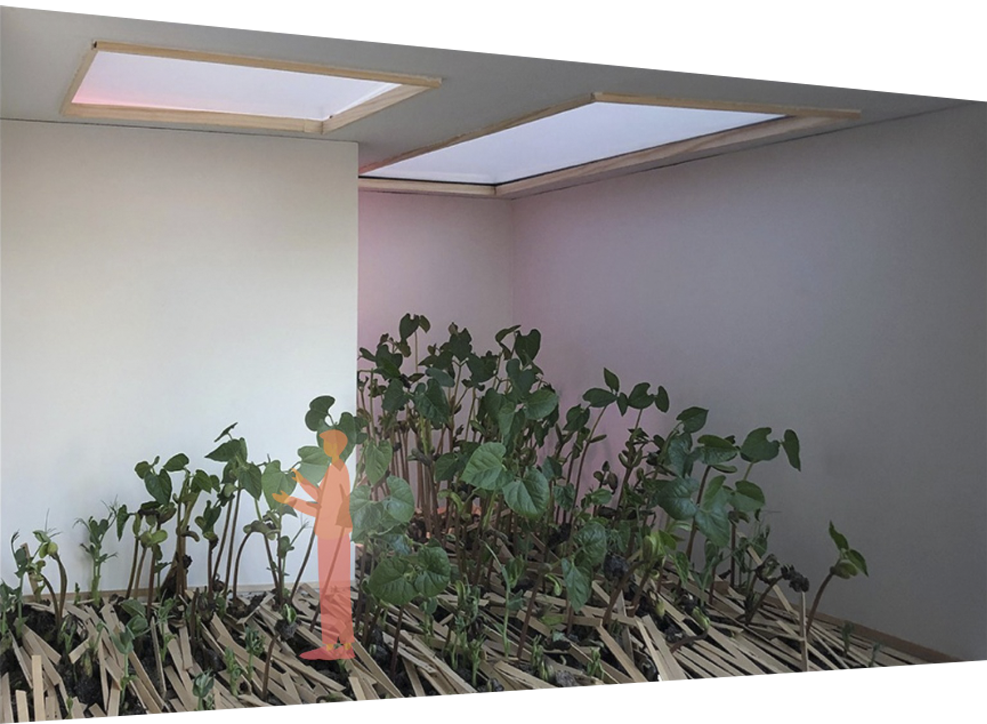 The wild pounding rhythm of a long expected shower annoys the window through which a large group of young bean plants look at the people passing by. Their human heads disappear in their human jackets, their human eyes disappear in their man made streets. Everyone’s on their way. The critic leaves the art space, hiding from the rain. But the trees rise up. Water! After the artist watered the bean sprouts in the exhibition, he finds the critic on a terrace nearby, leaving the confined greenery behind. The bean sprouts look worn off. Maybe disappointed. Tired of growing with too little future ahead. Still pretty, in a poetic way, in their search for something to hold on to. The critic found cover on a terrace and is thinking of the poetic beauty of the plants.

The artist: Are you Maartje?

The critic: Yes, I very well am. They shake hands   You want to take a look at your plants before we sit down and talk? I just went but…

The artist: No, I also was just there, I‘ve been watering the greens.

The critic seems a bit disappointed and then points upwards to the huge black sunshade onto which the rain beats.

The critic: Seems about right, when it is pouring like this. I guess we missed each other at your artwork then. How are they doing? Sad that the rain doesn’t enter their scene?

The artwork: There is a tangible idea of music where sound seems to enter like a character.

The critic and the artist cannot perceive the artworks’ communications and are thus limited to dialoguing together. They take a seat, order beer and coffee and proceed chatting.

The artwork: The actor is both a prime factor, since a show’s success depends on the effectiveness of his acting, as well as a kind of neutral factor since he is so rigorously denied any individual initiative.

The critic: What plants you got there? I recognized some beans.

The artist: They are all beans, and they are all from my own garden. I chose them because they are strong. Look at one bean, this one small out-of-this world cell. From this sprouts a huge plant.

The critic: You think they are aware of what they can do best? To grow, to climb?

The critic: But not those in the box over there, though. Their end is near. Shriveling…

The artist: That is right. But I have plenty of them. They got room to sprout here but not to proliferate, they were put in a context – an architectural situation that creates possibilities. He looks over the critic’s shoulder and points  See that building? It is not ugly but it is a cage. Created for but one purpose and nothing new or unexpected can happen there. But that shop could be a gallery next year. And this café is not the same as when I came here when I studied arts. This building… It’s done. We need more open space.

The critic: So these beans are not for growing but for meaning-making? Or is that what you do best. Who are you: the artist?

The artist: If you’d like to attach this poeticism to it, you do that.

He shrugs lightly. The critic nods in agreement, writes something down while the artist lights a cigarette.

The artwork: No decor! Objects of unknown form and purpose are enough to fulfill this function. This is a field where there are no exact rules.

A bit uncomfortable, maybe by the defining tone the critic put to it, the artist proceeds his explanation.

The artist: I actually do not like to be an artist. I like gardening more. I want to work together with the material I work with. Furthermore, I really believe things can co-exist or can be true besides each other. Look at me. This body is not one, it consists of millions of bodies. We are driven by bacteria and fungi which process information. For us. With us.

From this idea the artist’s face brightens up. For a short moment he seems to have an internal frolick.

The artwork: Every emotion has an organic basis and we charge his emotional voltage by developing emotions within him. To be familiar with the points of localisation in the body is to reforge the magic links.

The artist sips his milky coffee and gets back to the critic.

The artist: I have always been obsessed with light. When I write I do it by candles or an oil lamp. Through the movement, the flickering, the expanding and contraction, we become able to perceive what is normally hidden in the bright blinding electric light. It is like magic, like a presence to which we are able to connect. Am I wandering off? Sorry. But it’s what I experience and I know I should not go too deep into that. Might get lost.

The critic: I don’t think you are wandering off, you are telling me we are able to perceive the things we learned are not there or shouldn’t be there. What is that you want us to experience, then? You just put beans in a small container. That is sad. If you do not want to be an artist and you do want to garden. Why do you put plants in the box? Is it conceptual to you?

The artist: No, it is plants growing – from slumber. I am reading a book from the beginning of last century about Walden. It is very descriptive, naturalistic. I enjoy this style very much.

The critic: My colleague went to Pitcairn a lot of times to see them develop – naturalism?

The artist: Each and every year I get excited about the world starting to brisk up after winter, but lately this excitement turns into fear more and more. Will trees really grow their leaves again? Is spring going to happen once more? I no longer trust it! As if we go downwards and our world is getting filled up with static and linear shapes while ecologically we are so deprived. The wealth of sorts is diminishing. In my backyard there will be a solar park. I had other plans, an eco cathedral like the one of Le Roy.

Around the two of them the city starts showing its plan: a contest of straight lines and circularity. The artist has his hands bound up in the shapes, pushing and pulling the forms. Struggling, also with his words, he proceeds speaking his anecdote.

The artist: Now I do have contact with one of the people on that project, he likes my plans. While they were to cover the whole field with a black, shiny, panel pattern, I designed a more organic structure. I literally made room, a little space of nothing for new things to grow.

The critic: From what I see, you try to bend the things that are too rigid. How caught up are you?

The artist: It is hard to say. Hands-off is not always the solution. Doing nothing is a lot of the time not the same as giving room. To help I also must dive in and mingle with the garden I care for. Pause You’ve written so little on that piece of paper.

The critic: You say too much I think I agree with. But I do not think you are a naturalist or only a gardener.

The artist: Yes, but where are the words for it?

The critic: Yes, and where are the means? They are kept from us.

The artist: Yes, and we unlearned them, perhaps.

The critic: Yes! Maybe it is not made of words, we just forgot the magic links. That’s why this world is driving us literally crazy. We are nót crazy – the lives we live are.

The artist and critic order another drink, keeping the conversation going by in turn starting a sentence in agreement with the other. When the artist and critic have seperated, the critic walks through the city, murmuring. Suddenly she ends up standing in front of the Pitcairn again. The murmuring creates fog on the window.

The critic: Hey there… Do you think? It’s not naturalism he’s getting at? You are actors as he is too. His art is a Theater of Cruelty. It’s not the art that’s poetic, it is its double. What we call life. Or are you actually the creator? You don’t talk – you tell.

Only heard by the audience, the beans add a Nota Bene.

The artwork: No one knows how to scream any more, since they do nothing but talk, having forgotten they have a body on stage, they have lost the use of their throats. Abnormally shrunk, these throats are no longer organs but monstrous, talking abstractions. 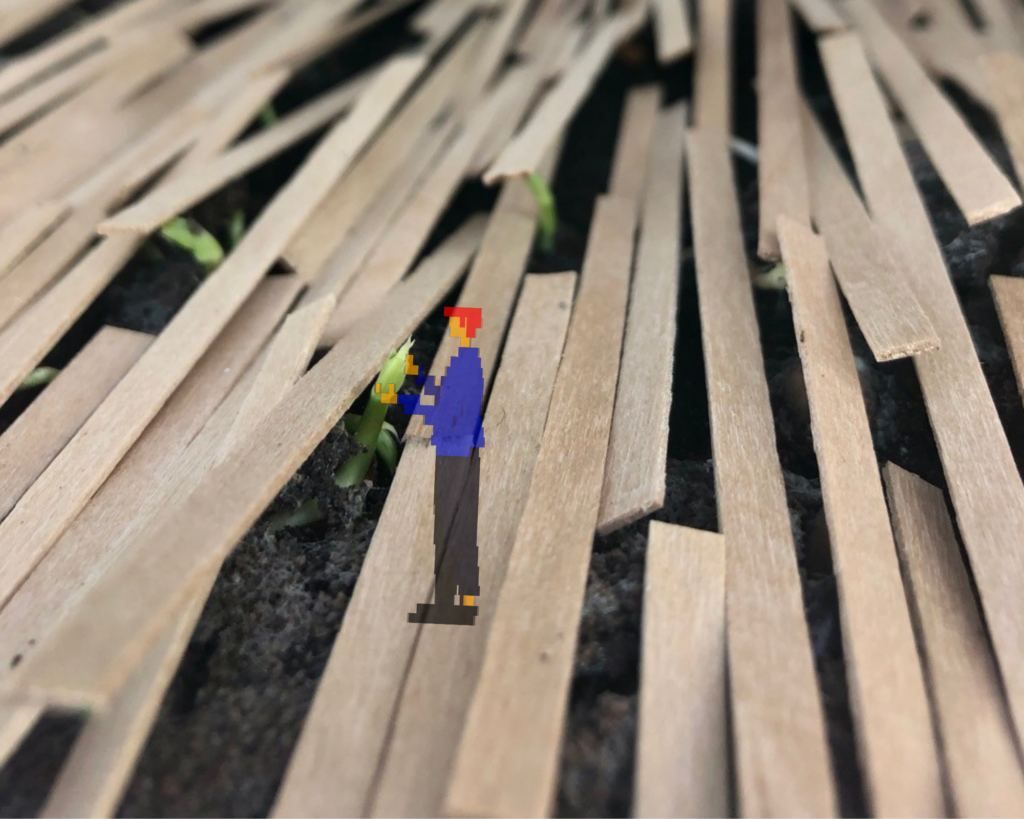