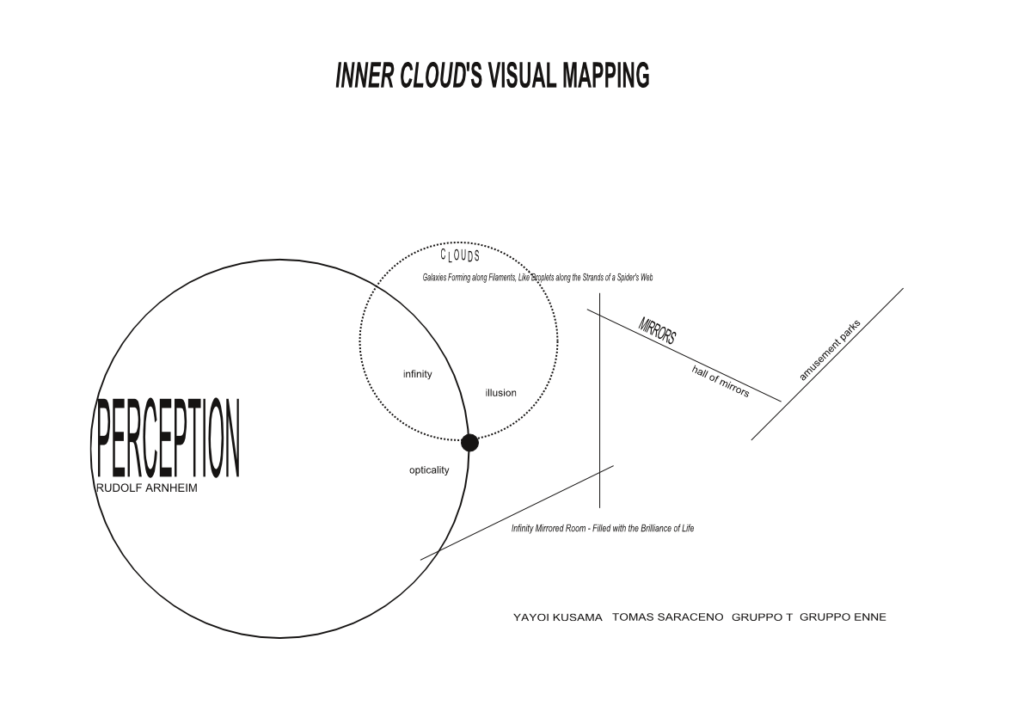 This short text aims at accompanying the mind map above, which is nothing more than a visualization of the main topics and references that came to my mind while thinking of Heike Weber’s Inner Cloud. As usual, I did not see the work itself (even though I am currently in the Netherlands), and my wanderings are based on online images.

I wanted to share with you some observations, and one question has kept popping up throughout the development of this material: what the role of this text should be. The neat, essayistic product I am used to deliver when writing about art is quite far from what this format supports. Honestly, it feels like what I am up to is sharing the backstage of my reflections, and presenting the process itself. The issue is: does the process without its final stage provide an interesting reading? Or does the lack of a final and rounded reflection take away value and possible relevant insights? To posterity the arduous sentence; to me, some notes into my contribution’s working.

When approaching a subject, the first question one should ask is: what method better suits the undertaking? As much as I think any perspective can be valuable for the understanding of a matter, I do question if some offer a better fit. There are many possible readings and theoretical frameworks that can be put into service; what element should make us weigh one against others? My personal bible for contemporary art, the volume Art Since 1900: Modernism, Antimodernism, Postmodernism by authors Foster, Krauss, Bois, and Buchloh starts presenting four main theoretical tools or perspectives: the psychoanalytical, the social, the structuralist, the post-structuralist (if I remember correctly). In my case, last month I introduced you to my loosely Warburgian approach of visual linkages, in order to define a trope and its inner content.

With Inner Cloud, an issue emerged: what is a trope without a figuratively based gesture or pose? Are there remnants that I should catch, a running-after-midnight Cinderella? What to do with a work which belongs to the stream of abstract art? Poor of validly elaborated answers, here is a short list of points.

First of all, associations – better thought of as the associative method – are always the principle underlying my thinking process, as well as they are at the base of the visual map. Plus, the visualization of these associations is translated as the map-shaping itself. Offering a proper guideline, other works of art can be found written in italics, while artists (as well as art movements or art critics) are written in capital letters. Other themes and topics are spread within the geometrical material. The interrelation of forms and writings is what gives life to the map, a possible visualization of the relationships between content-related units.

Secondly, the map – something visually organized – shows no other picture (for example of related artworks). The abandonment of other images to create the map highlights the pictorial nature of the map itself (here and now treated more as an image than before), and depends on considerations about image’s status, between copyright, usage terms and nature.

A third point concerns the field extension of image associations. A work based on abstraction calls for referring to the art field more than figuration. When seeing a recognizable figure, such as Postolle’s, the mind looks for similar ones, in general, from advertisement to anime series. With abstract works, my mind could not but gravitate heavily towards the planet of art history. As much as I am aware of other possible sources, the themes, images and discourses that came to me were highly related to art critical traditions (as the mere antithesis of abstraction and figuration itself).

SURFACE AS SPATIALIZING MEANS: AN ILLUSION OF INFINITY

Beyond these methodological struggles, if I can call them like that, what could be the “content” of my reflections around Inner Cloud? I do not want to spoil other unfoldings, by limiting possible multiplications between the presented factors. Still, I want to point at the triad of themes this work built upon: that of opticality, infinity, and illusion. The work breaks the limited room of the Pitcairn museum, offering the illusion of infinite space, a never-ending reflection, which, even if spatially defined and limited, brings forth infinity as a graspable and perceivable dimension. Surfaces have the fascinating ability to be at once shallow and deep, and with the right optical tricks, a 2 dimensional work becomes 3D. Still, this transformative power could just be that of trompe l’oeil. But in this case, surfaces give life not only to an illusion of a three-dimensional space, but of infinity itself (somehow a-dimensional). I remember the amazement felt as a child while finding myself between two mirrors, the awe provoked by seeing the corridor of infinite replicas opened at my sides. Somehow, space becomes the actualization of distancing, where the recursivity of the image mirrors that of the mind. Such distance reminds of that between phenomenon and noumenon. Knowledge is built on surfaces and their illusions, as well as on the mesmerizing feelings they engender (from Plato’s cave to mirror neurons). Both mirrors and clouds create imaginative environments, and the potential of putting together their perceptual powers breaks limitations. A drawing becomes an installation, as well as space becomes infinity.